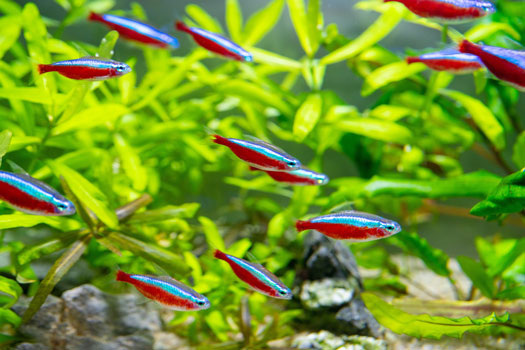 According to estimates by marine biologists at the International Union for Conservation of Nature, there were more than 30,000 fish species classified as of 2006, and approximately half of them live in freshwater habitats. Tropical fish are the most popular in the freshwater and saltwater aquarium hobbies, although cold water species such as koi can thrive in ponds located in regions with tropical climates. Within this great diversity of fish, a few species stand out for their resilience, hardiness, and adaptability. These are the kinds of traits rookie fish keepers should look for when they stock their first aquariums. Let’s look at a few species seasoned aquarists often recommend to beginners.

This species is one of the best-selling fish at aquarium shops around the world, so you’re sure to find them at your local aquarium supplier. Neon tetras are brightly colorful, highly adaptable, and peaceful as long as they’re able to swim in schools of at least four or five. Since they only grow as large as a couple of inches, you can keep a small school of neon tetras in a 20-gallon tank without the risk of an excessive bioload.

A 20-gallon tank with plants that take up 25 percent of space is a good habitat for this species, which are known for their voracious appetite for algae. Keeping two or three algae eaters is a great idea for a freshwater tank that gets direct sunlight because the algae bloom will keep them busy.

This prehistoric-looking fish needs a 20-gallon tank. It’s mostly solitary and will spend a lot of time feeding on algae and plant decay. Plecos are very resilient and can handle sudden changes in water temperatures and pH levels. It’s best to keep this variety in aquariums without plants because of their tendency to eat them.

The star of the animated film Finding Nemo is highly recommended to fish keepers who are just getting started with saltwater tanks. Clowns will rarely grow past four inches, so you would be able to set up a 20-gallon reef tank with a nice pair, live rock, decorations, and a couple of invertebrates such as hermit crabs.

Native to rivers all across North America, this species can thrive in water temperatures as low as 60 degrees Fahrenheit. White clouds are hardier than all tropical fish. They need to swim in schools of at least five, and they’ll eat just about anything.

If you have the space to accommodate a 100-gallon saltwater tank in your home, you can stock it with a few Tomini tangs, which are colorful scavengers that also happen to be quite hardy and will eat just about anything. Tomini tangs don’t grow as large as the more popular yellow tang.

Also known as aquarium catfish, this South American species is one of the most gregarious you can stock your tank with. Cory catfish are bottom dwellers that can help you keep the substrate clean. Even though this is a nocturnal species, you can still see it exploring and feeding a few times during the day. Make sure to stock your tank with at least two or three of these fish so they can bond and reduce stress.

This Asian species is native to muddy rice paddies and mangroves, thus making it able to thrive in small freshwater tanks. Betta fish are recommended to beginners who only have space for 10-gallon tanks, but they’re fighting fish that shouldn’t be kept with other males.

Beginner aquarists may not know all of the essential supplies they need for their tanks. Reach out to Aquatic Warehouse for everything you need to properly maintain your aquarium. From aquarium monitors and controllers to filtration and LED lighting, we’ve got it all. Stop by our store located in Kearny Mesa, order what you need from our website and have it shipped to you, or give us a call with any questions at 858-467-9297.